Flipping through some old journal entries, I was reminded of a horrifying misadventure that took place a few years ago. The mere recollection of it still sends shivers down my spine… as I’m pretty sure that I spent the better part of the following year trying to recover from it. In an attempt to exercise the demons that still haunt me after this dreaded event AND perhaps provide you readers with a few laughs… I’ve chosen to share it.

I am aware that many of you have (at one time or another) experienced a similar horror. If so, my heart goes out to you. Hopefully yours wasn’t as bad as mine, and if it was… I hope you’ve made a full recovery, or you are actively seeking help. Perhaps yours was worse, or perhaps—and I understand that this is rather uncommon—your experience was quite positive and may have even had a happy ending.

The event that I am referring to is the single person’s worst nightmare: The Dreaded Blind Date.

Up until the fateful night, I had never been on one of these. Since my divorce I have been set up a time or two, but even then, I always had the good fortune of meeting the person in a nice, neutral setting along with the setter-uppers beforehand. I’m not even sure if I ever would have gone on a blind date, had I not been TRICKED into it. That’s right, my friends, I said tricked. And that, should have been the FIRST of MANY red flags that I would soon see…

Rather than tell you the whole story of the ill-fated evening, I thought it best just to hit the highlights by chronologically listing the events of the date in the order in which the “Red Flags” appeared. 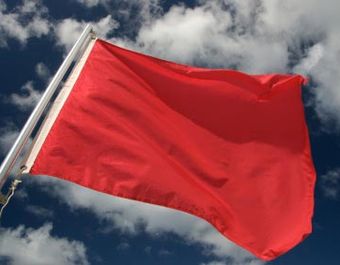 Red Flag #1 – You are TRICKED into this rendezvous by an ornery neighbor who has a penchant for lying.

Red Flag #2 – Your “date” is good-looking, has two college degrees, a great-paying job, has custom built his own home in a fancy sub-division, drives an expensive, tricked-out SUV, is 38 years old… and STILL SINGLE.

Red Flag #3 – Aforementioned date (let’s call him Max) decides that instead of meeting at a nice restaurant in a nearby metropolitan area (from which there are many to choose), you should meet up at a BAR in the middle of nowhere. And I mean cornfield-and-cattle-middle-of-nowhere.

Red Flag #4 – After meeting “Max” for the first time at said bar-in-the-middle-of-nowhere, he spends more time talking to the regulars (who he claims NOT to know) than he does to you.

Red Flag #5 – Of all the empty tables in the place, Max chooses the only one that has a severe downward SLOPE, making everything on the table slide toward the floor, hence causing you to chase after your food and beverages the entire night.

Red Flag #6 – When Max DOES finally sit down and talk to you, he cannot seem to talk about anything other than the fact that he was the quarterback of the football team and basketball team captain in HIGH-SCHOOL!

Red Flag #7 – Max reveals to you that he is somewhat of a “neat freak” who feels compelled to MOP his GARAGE floor every single night so that he’ll never get his socks dirty should he decide to venture out there without his shoes on. Every NIGHT. Freak.

Red Flag #8 – Max all of the sudden takes a notion to just get up, LEAVE the table and WALK away without ever saying a word or excusing himself.

Red Flag #10 – As multiple beers begin to take effect; Max begins referring to himself in the 3rd person. Examples: “Max liked his dinner” and “Max is going to have another beer” and “Max needs to go to the bathroom”… Seriously people, I am not making this shit up… he actually did this. All of it.

Red Flag #11 – As additional multiple beers begin to take effect; Max now refers to himself as “Uncle Max.” Examples: “Uncle Max is tired” or “Uncle Max wants to know if you’re having a good time” or “Uncle Max wishes he didn’t have to work tomorrow.”

Red Flag #12 – After a brief inquiry, it is revealed that, in fact, “Uncle Max” has no nieces or nephews. That’s right. You can figure that one out on your own because I’m still trying.

Red Flag #13 – At the merciful conclusion of the date, Uncle Max insists on driving home while extremely intoxicated, and actually PEELS OUT of the parking lot after walking you to your car… never asking if you know your way home or feel comfortable driving yourself out of this “cornfield-and-cattle-middle-of-nowhere” and back to civilization.

Of course, I never heard from OR called Uncle Max again after that Terrible-I’m-Going-To-Need-Therapy-If-I’m-Ever-Going-to-Date-Again-Evening. However… the universe, being as ironic (and sometimes) benevolent as it is, gave me the opportunity to meet not one, but TWO of Uncle Max’s ex-girlfriends about a year later. And I have since learned that he has a reputation in at least 4 counties for being quote: “A little-off-his-rocker” and “A total whack-job” as well as “Unable to make a commitment” AND “A Recovering alcoholic”—who oddly enough, still gets drunk on a regular basis.

Needless to say, I have learned from my terrible experience that one should proceed with EXTREME CAUTION when going into a blind-date situation. Because unfortunately, the crazy ones don’t show up surrounded by yellow caution tape, bright orange cones or flashing red lights.

Since the whole dreadful-date-night-debacle, I have been seeing someone very special (in addition to my therapist). He is a wonderful guy and my best friend. He is also the most grounded, kind, thoughtful and selfless man I have ever been in a relationship with. So apparently the “good ones” ARE out there… even if they can be a little tough to spot.