For four long months I have dreamt of the moment when I could confidently—without pausing to take a deep breath, sip ginger ale, eat a cracker, or run to the bathroom to throw up—write about the hell that was all-day morning sickness. The only way I could possibly put pen to paper to record the experience was to be safely and securely on the other side of it. Even now, as I write these words half way through my pregnancy, recalling certain memories evokes powerful feelings… to gag, that is.

In the earliest weeks after learning that I was, in fact, in the family way, it concerned me that I felt no nausea. It seemed like all I’d ever heard about being pregnant was that you felt dreadfully sick. Thus, being the worrier I am, I thought my lack of dreadful sickness was a surefire indication that something was wrong. Though, I quickly learned that one should never count their cookies before they’re tossed.

Once the cookie-tossing began, it was a force to be reckoned with. Just ask my husband (who just so happened to be busy driving my emotionally-unstable, nauseated and exhausted @$$ all the way back to Ohio from New Mexico at the time). Along with infinite potty breaks, Lee had the coveted job of rustling up super-specific, pregnant-lady emergency supplies in the middle of the desert such as Cap’n Crunch, dry toast, pancakes, orange sherbet, ginger ale and root beer floats to name a few.

After the first of the year, back in Columbus, I was a wretched mess. I couldn’t keep down something as simple as a saltine. My suitcase and bags of souvenirs remained untouched on the floor for two whole months and simple tasks such as brushing my teeth or cleaning the cat’s dishes would send me heaving. Miraculously, in the midst of this misery, a brand new drug approved for the treatment of severe morning sickness had just hit the market and my doctor sent me home with a mountain of free samples.

This little miracle pill enabled me to eat certain types of food once again and tolerate being in the same room with my husband as he cooked his own supper, but it didn’t take away the nausea completely. So I subsisted on any old weird thing that sounded good to me at the moment, such as: banana smoothies and Cool Ranch Doritos, Chex Mix and Dots, cherry icees, peanut butter and honey sandwiches, and pickles and cranberry juice.

It was during this time that I also learned to lead a much smaller life that involved little to no make-up, optional showers and lots of yoga pants and baseball caps. For three months I shuffled around in less than a 1,000 square foot radius… going from the bed to the recliner to the bathroom to the fridge and back to bed again and thus, cabin fever became VERY real. I would dream about getting out — and going anywhere that was different from the house became my mission… and my madness.

And it all came to a head one snowy, subzero day when I became particularly fixated on leaving the house and going out to eat. It was precisely the sort of wet and chilly day people are happy to remain indoors, but I insisted that we go out and try a brand new restaurant. Initially I was psyched! After spending way too many days indoors with unruly hair and in raggedy pajamas, I was finally getting out! And my husband (who probably just wanted to stay home and watch ESPN) was happily taking me! I showered, fixed my hair and make-up, and cut the tags off of a brand new maternity outfit.

The outing, however, proved to be a terrible idea. The roads were in terrible shape and the drive took three times longer than normal, so by the time we arrived at the restaurant, sat down and ordered our food… I was beginning to lose my initial “out on the town” glow. But here we were, at my insisting, and I was DETERMINED to make this work. So I said nothing, and I smiled and I made small talk and I ate. And I ate. And I continued to eat even though my topsy-turvy tummy had twice tried telling to stop.

“Are you alright?” Lee asked me from across the table. I nodded in the affirmative, even though I was anything BUT alright. “… because you don’t LOOK alright. Why don’t you get up and get some air.” He said to me gently. So I took his advice. And I almost made it to the bathroom.

Needless to say, since that fateful and mortifying day, I became a whole lot more content with my “small life” of staying at home in my raggedy pajamas with my unruly hair. Besides, from what I hear about bringing home a new baby… showers are optional anyway. Right? 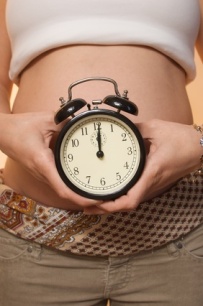 With a sharp exhale, I dried my hands and put a dampened palm to my sweaty forehead. Blinking at my reflection a few times in the bathroom mirror, I looked at the test again, making sure that I was seeing exactly what it was I thought I was seeing. Had I imagined it? Had I read the instructions correctly? This. Is. Impossible.

“Tell me EXACTLY what you see here. How many lines do you see?” I said in cautious tones, simultaneously standing on my tiptoes and biting my pinky finger, anxiously awaiting his reply.

“I see two lines.” He replied and then looked at me quizzically, his expression asking a thousand and one questions, for which I had no answers. So I removed the wrapper and let him read for himself exactly what the presence of “two lines” indicated on the home pregnancy test. And then I cried. I REALLY cried.

I’d like to tell you that those very first tears after learning we were (shockingly) about to become parents were tears of unbridled joy and expectant bliss. But they weren’t. Those first tears were nothing but sheer, unadulterated fear. Fear that we weren’t ready… Fear that we didn’t have what it takes… Fear that in my 39 years alone on this earth I had grown far too selfish to EVER be equipped to care for an innocent being… And OMG! I AM THIRTY-NINE!

Then the real fear came: The fear that I was too old… Fear that we (but still mostly me) were too old… And fear that my dilapidated-broken-down-ancient-ruin-of-a-nearly-40-year-old body was too old to successfully bear a healthy child. “How is this even possible?!?!” an internal voice screamed. “My eggs are from the FORD ADMINISTRATION!” But apparently it WAS possible, and it IS possible, because it IS happening. And that test (along with the four additional tests I would take soon after) wasn’t lying.

A mother of “advanced maternal age” is what they call you when you find yourself with child over the age of 35, so it’s a pretty safe bet that I am really pushing the envelope here. Apparently, there’s a seemingly endless supply of things that a “woman of a certain age” ought to worry about because of the “advanced maternal age” label, such as: genetic anomalies, high blood pressure, gestational diabetes, low birth weight and premature labor and/or delivery. But here’s the thing… I’m choosing not to spend exorbitant amounts of precious energy worrying about all of that stuff because, you see… I wasn’t supposed to be here. Ever.

Many of you who regularly read this blog already know that I have long held the belief that children were not in the cards for me. I had, for the most part, accepted this and Lee and I were about the business of building a happy, meaningful and productive life together sans children. That is, until right before Christmas, when we got this bit of earth-shattering news.

And I can tell you that the most jaw-dropping bit of all is that there was no magic pill. Years ago I tried the magic pills, the magic shots, and the magic procedures and surgeries performed by the magic doctors — all to no avail. And yet somehow I am here now, against all kinds of odds. I am here now—at a ripe, old, advanced maternal age—terrifyingly, dumb-foundingly, shockingly… miraculously.