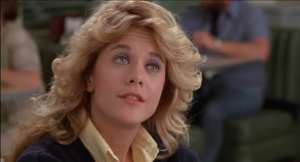 The 1989 hit movie When Harry Met Sally is a beloved favorite for men and women alike. It was then and remains today a spot-on, hilarious narration of the intricacies of the male/female romantic relationship.

Early in our relationship, my boyfriend and I watched this movie together. One night, months later, when we went out for dinner he called me “Sally Albright” after I finished placing my order.

Sally: I’d like the chef salad please with oil and vinegar on the side, and the apple pie a la mode.

Sally: But I’d like the pie heated, and I don’t want the ice cream on top. I want it on the side, and I’d like strawberry instead of vanilla if you have it. If not, then no ice cream, just whipped cream, but only if it’s real. If it’s out of the can, then nothing.

Waitress: Not even the pie?

Sally: No, just the pie, but then not heated.

OK. So maybe Sally was a bit, shall we say, particular about how she wanted her meal… but come on, she’s paying for it. But what I call “particular,” most men call “high maintenance.” And such was the case with Harry / my boyfriend.

Harry: There are two kinds of women: high maintenance and low maintenance.

Sally Albright: Which one am I?

Sally Albright: I don’t see that.

Sally Albright: Well, I just want it the way I want it.

And there it is. The male take on “On the side.” But I still don’t see the problem here. This is, after all America, and if we CAN have things “on the side,” then why are we considered “high-maintenance” just because we ask for it?

There are things that I prefer a certain way… and if, by requesting them, I am not placing anyone in harm’s way… then I just don’t see the problem. For example:

Sally Albright. It is a nickname that my bf still calls me to this day. And although I have absolutely NO idea why… What else can I say?

I just want it the way I want it.