“You’d better bundle up today because it’s cold, Cold, COLD out there! Most areas are currently experiencing single-digit temps that aren’t expected to climb out of the teens until tomorrow!”  The way-too enthusiastic weatherman squawked at me from inside the TV.

Face buried deep in the pillow, half comatose and wrapped blissfully in my flannel sheets I groaned as I felt an overwhelming desire to violently hurl the remote at him.

“Studies show that this is the most miserable time of the year for Americans.”  The annoyingly chipper anchorman regurgitated immediately after the weatherman stepped down.

“No shit.”  I mumbled aloud as a peeled myself from the heavenly embrace of memory foam and goose down and set my feet on the cold, hardwood floor.

The anchorman continued.  “…With the holidays over and most people heading back to work after a long vacation, people report finding this time on the calendar to be the most difficult. Darkness still looming in the early morning, the frigid weather combined with poor driving conditions effects people significantly. Not to mention that the bills from the holiday season are already beginning to arrive adding even more stress to the average financially-strained citizen.”

“Well aren’t you a genius. Like I needed YOU to explain to ME why my current mood is creeping from ‘just a little blue’ ever closer to ‘murderous rage’.”  I spewed at him as I pulled on my robe and bitterly thrust my ice-cold feet into their slippers.

Mr. Brilliant then expressed that  “one individual we spoke to explained that she felt rudeness was particularly an issue during the actual holiday season this year so she can only imagine what it will be like now that the so-called ‘Season of Joy’ has come to an end.”

“Really?” I questioned in a flattened but sarcastic tone. “You only spoke to ONE individual? Perhaps you ought to pay me a visit. I’ll give you something to talk about. My focus would be on the phenomenon of bubble-headed news anchors stating the obvious and then going so far as to call it ‘news’.” 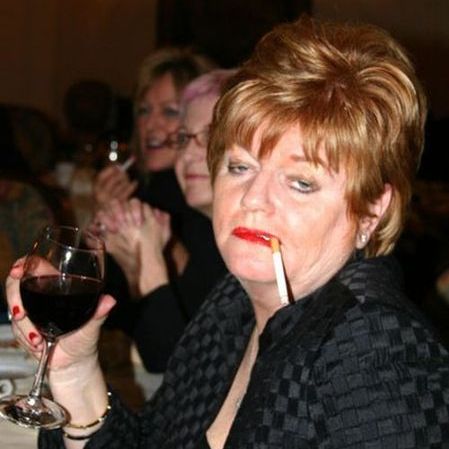 Perhaps this is the person they spoke to... Ain't she a peach?