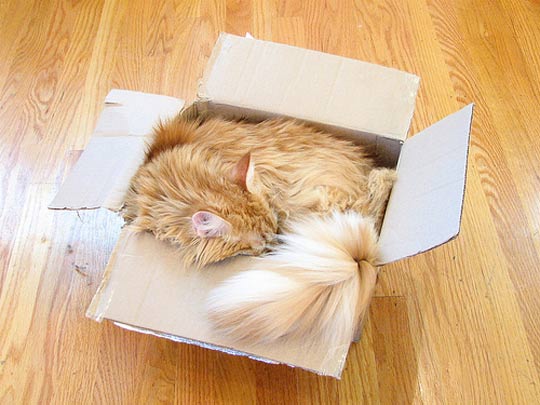 Ahhh the joys of moving. Taking your house apart bit by dusty bit and placing all of your things into boxes only to load them onto a truck, drive somewhere else, unload them from said truck, unpack them and try to figure out where the hell you’re going to put everything in the new space.

Yes, it is just one of those things that we humans must do now and again and it is never fun. The results can be wonderful and rewarding—make no mistake—but the act itself is a little… shall we say… off-putting?

But I am an adult and I can handle this transition. Excited and anticipatory about the future, I am able to focus on all of the new adventures coming my way. The cat… on the other hand (Or should I say paw?) is not going to be quite as thrilled.

Currently, my dining room looks like a cardboard cityscape. Boxes of all shapes and sizes are stacked up lining the periphery waiting anxiously for me to fill them with my crap. I thought it would be a good idea to have the boxes close at hand so that Stanley, my cat, could get used to them for a bit before I begin the demolition of his world.

Now, cat owners know this already but for those of you non-cat people, I will fill you in on a little cat secret: They love boxes. Like a kid at Christmas—more interested in the box than its contents—a cat will hop into an open box and make it his own within a matter of seconds. It is a rather adorable sight to behold… if you like cats… and I obviously do… but I digress.

Stanley is of course, no exception. He started out at the bottom of the “city” just lying around inside one of the small ones that happens to be turned on its side.  He then bravely ventured to another larger one flipped upright and hung out in there for quite awhile.

Then last night I found him, all Lewis-and-Clark-like, boldly scaling the stack to mid-level. By tonight I expect to come home to discover that he’s reached the top and rigged up some sort of flag all MacGyver-like out of a fork and dishrag to stake his claim.

All this time I can’t help but think to myself: “Sure you love the boxes NOW Stanley… but just wait until I begin packing your entire universe into them and suddenly everything you know is gone — including your favorite blanket.” And I am riddled with guilt… praying that he takes to his new digs happily and quickly.

He’s going to hate me. At least for a little while… Probably until I start unpacking in the new place and the resurrection of his cardboard city begins again.

7 thoughts on “Cats and Cardboard Cities”