I killed a mouse in my house last night… with a hammer. It was a little disturbing at first, bits and pieces of it flying all over my kitchen and raining down upon me like shrapnel after an explosion as I lifted the hammer high in the air in order to strike again and again. But I’m not gonna lie, it was also a little invigorating.

Why the hammer you ask? Isn’t that a little overkill for something so small? Well, I just wanted to make sure it was dead. I couldn’t stand the thought of it lying on the top of my garbage can, half alive and suffering. Such uncertainty could keep a person up at night you know.

Now, before you go passing judgment or reporting me or my blog to PETA… I’ll tell you that it wasn’t cute, furry and capable of speaking Russian like Fievel the Disney mouse. It was a Logitech mouse. And I had reached the end of my virtual rope.

I should have been mad at the bank who YET AGAIN changed their security measures and thus made ME change MINE. Why does the bank feel it necessary to change things every 5 minutes anyway?

Or I could have been angry with my computer because it’s getting up there in years and painfully slow. It doesn’t exactly snap to attention quite as quickly as I would prefer.

So I lost it. And I took out my rage on an innocent, little grey mouse who didn’t deserve what it got. I didn’t bash it to smithereens right away. I actually just set it down on my desk a bit too hard… and when I tried to revive it… nothing happened. It just sat there… lifeless… the red light on it’s optic sensor forever darkened.

And THEN, I was no longer angry with the bank or my PC’s sluggish processor… I was angry at myself. Livid to be more exact. Mad because I had let my stupid temper get the better of me and now I was crippled and mouse-less. So I placed the dying mouse on the rug, took out my hammer and finished it off by smashing it into a million, tiny pieces.

Not yet done with my computer work, I snuck next door and borrowed a mouse from my mother. I rushed into my parents’ house, stealthily snagged THEIR mouse and declared: “I’m borrowing this! My mouse is broken! Will return it in the morning!”  I then rushed right back out the door like I was fleeing the scene of a crime.  Also, before they had the chance to ask any questions.

Like I said… it did feel good. Who doesn’t fantasize now and then about violently destroying a piece of the very computer equipment by which we often feel enslaved? 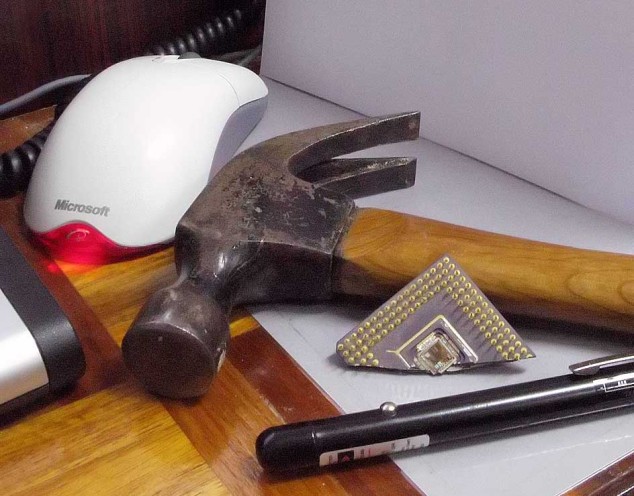