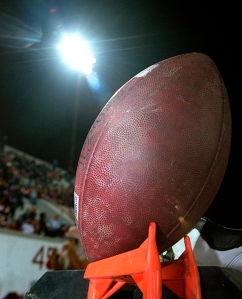 The season is so brief, maybe that’s what makes it so special. In northeastern Ohio, football is king. After all, The Pro Football Hall of Fame is only 20 miles away from my little hometown. Professionally speaking, we may have one of the worst teams in the NFL… but that doesn’t stop us from loving the sport. It may infuriate us and cause people to occasionally fly into fits of rage and throw things… but that’s OK. It just demonstrates how much we care.

However on Fridays, we tend to forget how terrible our pro team is and turn our attention to a different set of heroes: The local high school football teams. They don’t play for fame or money… they play for their schools, their towns, their classmates and teammates. And more importantly… they play with their hearts.

There is something magical in the air on Fridays. It’s as if the whole community is anxiously awaiting the upcoming battle that will happen later in the evening beneath the bright stadium lights. Businesses show their support by placing signs in their windows and merchants display and sell all sorts of items that carry the local mascot. Homes are adorned in bright school colors with flags and banners. Students wear jerseys, t-shirts and face paint to demonstrate their allegiance. And by early afternoon the pep-rallies are in full-swing.

At 7 p.m. it’s as if there is nowhere else in the world to be than at the stadium. The town is empty and the only sound you’ll hear for miles is that of the marching band and the voice of the announcer. The stands are packed and so are the fences that surround the field. Everyone has found a spot to settle in and watch their favorite high school hero for the next several hours. The younger kids run through the crowds tossing the football, no doubt imagining the day when they will be on that field and all eyes will be fixed on them. The adults are likely arguing about the official’s call or even more likely reminiscing about their own glory days… when they too were charged with the energy of youth, fueled by endless possibilities.

It lasts for just 10 weeks, a little longer if you’re lucky. And in that brief time the world around us will transform from the warmth of summer, through the brilliance of autumn and into the colder grasp of winter. The grass on the field turns brown and frosted, the bleachers stand cold and empty, the loud speaker is silenced and the Friday night lights go out. All grows quiet as the world retreats indoors and a few stray snowflakes start to fall across the faded white lines of a vacant field.