Situated halfway between Cleveland and Pittsburgh lies a sleepy little village called Minerva, OH. And it’s pretty safe to say that inside this tiny speck on the map there isn’t much going on. Most of the year it is fairly quiet. Until football season that is.

Between the months of August and November Minerva and all of the surrounding specks on the map turn into quite different places. We may not have the ocean, the mountains, 365 days of sunshine or celebrities on parade — though we do have several zoos… But that’s another post for another day.

One thing we do have is high school football.

It’s hard to explain to people who aren’t from here just what all the fuss is about. But I can tell you that it’s about community and pride and the spirit of competition. It’s about cramming as many of your friends and neighbors and maybe your not-so-friendly neighbors into the bleachers on a crisp, Friday night and sharing an experience. Enjoying, for once, what it means to have everything in common… if only for a few hours.

In this place we love our team whether they are good or bad… but even more so when they’re good. And this year, in Minerva, the team is good. Really good. After completing a thrilling 10-0 season and securing the 2011 Northeastern Buckeye Conference Championship, they made history one week ago today by winning our first playoff game EVER. Our team has gone to the playoffs plenty of times, but we’ve never known what it’s like to go on after that. And while that may not seem like a very big deal to you… trust me, around here… IT’S A BIG DAMN DEAL.

Tonight, for the first time in the history of small town Minerva Lions football, we will get our chance…

The following is something that I wrote three years ago, during my first football season after moving back “home” from New Mexico. I honestly don’t know that I can capture the emotion of it any better than I did in my original Friday Night Lights piece. For those of you who don’t quite “get it” when it comes to small mid-western towns OR football… please tune in on Monday when I’ll have something different to offer.

But for all of you who do get it and who will be cheering from the stands right beside me… Enjoy… Post this to your Facebook page… Email it to your friends… But most importantly… GO LIONS!! 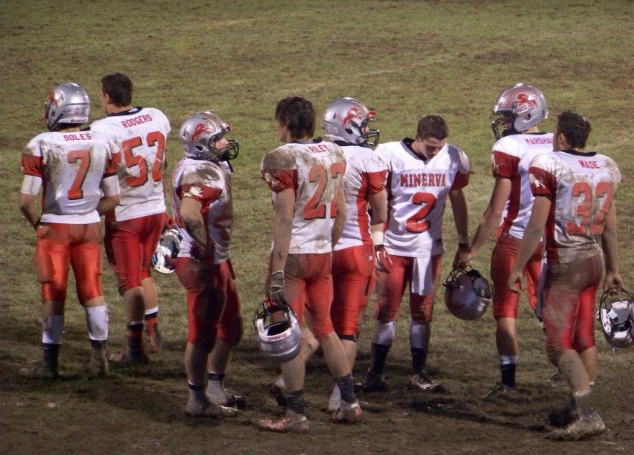