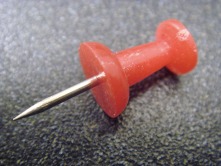 Recently I have become aware of a new phrase that has crept into our popular culture and me—being the words-person that I am—am intrigued by it. The phrase I am referring to is: “Let’s put a pin in it!” Basically defined it means: Let’s plan on doing <insert the name of said activity/task/chore/meeting here> at SOME point in time… just not THIS particular point in time.

I have not personally used the phrase but have observed it being used on at least three different TV shows this season. I’m not sure where it started or how long it has been around… yet I cannot help but wonder with all of the interest circling a little thing called Pinterest these days… Is there a connection?

I was introduced to Pinterest by a blog called Becoming Cliche. She was beginning to examine the social networking and idea-sharing site and discussing Pinterest’s false exclusivity and how she wanted so badly to be a member, that is, until they accepted her as a member. You see, everyone eventually gets to be a member, whether you are invited to join by another member or you shamelessly solicit membership directly FROM the site itself.

Anyway, I managed to stay away from this addicting site, that is, until a friend invited me to join since I would be doing some redecorating in the near future. It was then that I realized how many of my friends were already on it and how active they all were in generating these virtual bulletin boards bursting with fun, fresh ideas from fashion, decorating and design to books, movies and basic car repair.

The trouble is, I’ve been too busy with my move to actually get into creating my OWN board and it is making me feel like a super, cyber slacker. Everyday I see my inbox grow with messages that another friend and another friend and another friend are now following me on Pinterest. Maybe no one actually cares. Maybe no one actually LOOKS at my blank corkboard made of pixels. But the perfectionist and “joiner” in me causes me to imagine the deep disappointment of my friends when they visit me and find… Nothing. Nada. Zip. Zero. And zilch.

So for now… with regard to my activity on Pinterest, or lack thereof… I guess I’d just like to say to my fellow friends and Pinsters out there… Let’s just put a pin in it. At least until I actually take the time to figure out how the hell to use it.

6 thoughts on “Putting a Pin In It”