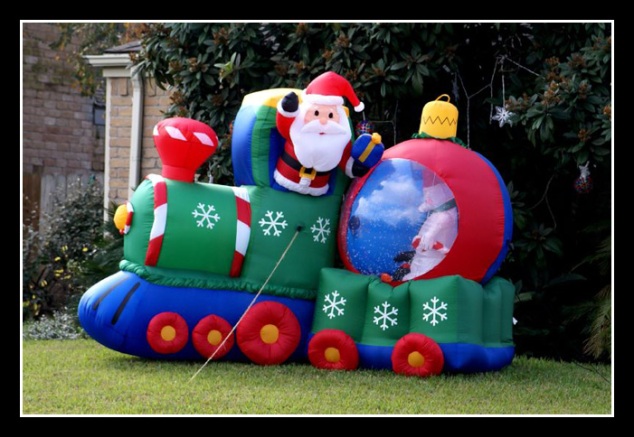 Last December I came home to find a red plaque hanging on my backdoor. It had 4 simple words on it, presumably for Santa. It read: I have been naughty. And I knew right away who the culprit was… it was my dad. He is famous for finding these unique little items that no one has ever seen and then leaving them in surprise places for you to discover.

For example… a few nights earlier… at nearly 11 p.m., I discovered a hobby horse at the top of the ladder up to my loft and it scared the shit out of me! Hobby horses are a joke between my father and me that goes back to elementary school… but that’s another story for another day. Anyway… this hobby horse was just sitting there… silently centered in an obviously very carefully chosen location. It felt just like the sort of thing a killer would leave to let you know he’s there… right before he leaps out of hiding and murders you.

I know, I know… I watch too many movies.

But back to the “naughty” thing… I honestly don’t know where he is coming from telling Santa I’ve been a naughty girl. I mean honestly, I think I am just a misunderstood, passionate person with a unique zest for life who requires a healthy amount of “me” time and who also happens to have a bit of a preoccupation with the macabre.

Dear friends, read the following and tell me…

Is It Wrong To…

1. feel like sleeping until noon everyday and then seriously entertain the idea of doing absolutely nothing after that?

2. expect that radio stations ought to play music instead of combing through the minutia of pervy Herman Cain’s sexcapades as well as the cognitive integrity / mental stability of each of the Republican Party candidates for the entirety of my 20 minute commute into work?

3. yell obscenities (with the windows up of course) or honk the horn at the driver in front of me who doesn’t use his/her turn signal, drives under the legal speed limit, cuts me off, or just doesn’t follow the rules of the road in general?

4. drive 10 MPH in front of someone who has been tailgating me for the last 15 minutes when they can’t pass me because of oncoming traffic and then floor it when they are able to pass me? Oh… and to thoroughly ENJOY this while I am doing it? I mean… absolutely, totally and completely DELIGHT IN IT to the point of drunken giddiness?

5. find joy in feeding the dog peanut butter just so I can watch her try for over an hour to get it all off of the roof of her mouth?

6. fantasize about taking an ice-pick to all of those inflatable Christmas lawn decorations? You know… to every last one of them that I see? Or after I’m finished unleashing my misguided torrent of rage on all of those unsuspecting Santas and Rudolphs… then to consider driving around and actively searching for more in which to slay? Or should I say: sleigh? Get it?

7. continuously assault you, the reader, with bad puns purely for my own enjoyment and simply because I can?

8. wish for a winter storm SO severe, and SO widespread that it knocks out power to everything within a 50-mile radius, making the roads impassable and thus causing everyone to stay inside for days and days with nothing else to do but sleep, read and play UNO, Monopoly, Yahtzee or Scrabble? Or did I mention sleep?

9. insist… when playing Monopoly… on being the banker in order to eventually cheat everyone, dominate the entire game and ultimately win? You know, like bankers do in real life?

10. text message a last-minute decline of attendance AND my sincerest apologies for not making it to the Christmas party / family gathering / function where everyone was expecting me by pulling a “Marcia Brady” and saying that “something suddenly came up” when in actuality I just didn’t “feel” like going because truthfully, I would much rather be outside slaying inflatable Christmas lawn decorations?

See, I don’t particularly think there is anything odd, strange, “twisted,” “sadistic,” “demented” or “naughty” about any of those things… but then again… maybe that’s just me.

Nevertheless… I guess I will find out in less than one month whether or not Santa agrees.