Last night I was perfectly content sitting on my couch and NOT multitasking. I was doing one thing and one thing only. Watching Seinfeld re-runs. I was not on the phone or the laptop Facebooking, Twittering or blogging. I was just sitting there—like a tree stump dressed in grey sweatpants and a weathered In & Out Burger t-shirt—and it was glorious.

It was at this point that I saw a commercial for the newest ipad. The commercial showed a woman about my age, in the Apple store, looking at the shiny new gadget the salesman had just presented to her. She cautiously grasped the ipad like it was the Holy Grail and the moment it was in her hands, she was immediately transported to all of these exotic locales.

She traveled to remote sun-washed beaches, gourmet, five-star restaurants, rockin’ night clubs, casinos and both National and International landmarks. And all the while, she never looked up from that damn ipad. Apple’s selling point being that this device can go with you wherever, whenever and you can stay connected. 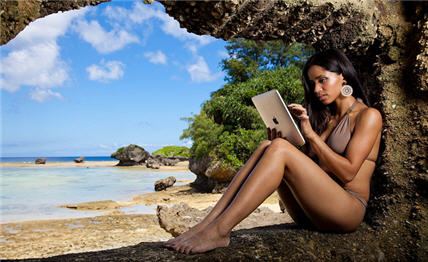 I’m sorry, am I the only one who has the desire to visit remote and exotic sun-washed beaches, gourmet, five-star restaurants, rockin’ night clubs, casinos and both National and International landmarks for the sole purposes of getting away from AND staying OUT of touch with the world? I mean, there’s a reason that the freakin’ screen savers and wallpapers on these things have pictures of Fiji and Mt. Kilimanjaro on them. Duh.

I don’t know about you, but if I had the time and resources to travel to far-flung corners of the globe and visit the types of exclusive destinations that this chick was inhabiting in the ipad commercial… I would take that flat, wireless, super-sleek, state-of-the-art, hi-speed, touch-screen piece of crap capable of keeping me “connected” 24/7… and fling it as far as it would go.