Such was the case for me last Friday while out doing a little retail therapy. I have been looking—actively looking—for a certain type of brown sandals for over a month now. They’re simple and I saw them everywhere this summer so I figured they wouldn’t be hard to find. More wrong I could not have been.

I made sure to check the shoe department everywhere I went, but no dice. Although, up until 2 weeks ago, I had kept my search somewhat casual. So last weekend, I decided it was time to ratchet it up a notch now that the fall fashions are appearing and the summer sales are in full swing. Still nothing.

So I gave up and bought a cream-colored pair instead. They are cute… just not exactly what I wanted. Then this past Friday while shopping for something else entirely… there they were. The brown sandals. The EXACT brown sandals that I have been coveting for at least 6 weeks now. And they were on clearance. And they were my size. And they were P E R F E C T.

When I returned home, Lee was curious to see what I had purchased, so I showed him. But when I got around to pulling the shoes out of the bag, he just looked at them and said: “Those look like the most uncomfortable shoes in the world. They look like a form of torture.” I told him he had no idea what he was talking about. These sandals were absolutely comfortable and just my size.

That is, until I wore them to work for the very first time.

Let it be known that it is never a good sign if your new shoes are hurting you while on the drive TO work. Also a bad sign might be that the very thought of them on your feet conjures up crazy imaginings of Chinese foot binding. I’m not joking. Poor, little Chinese girls were all I could think about on the drive to work.

I guess strutting around in front of a shoe mirror for 2 seconds in the store because they look exactly like the thing you’ve been searching high and low for … AND they are just your size … AND they are on clearance … doesn’t mean jack to your toes… or your heels… or your ankles. 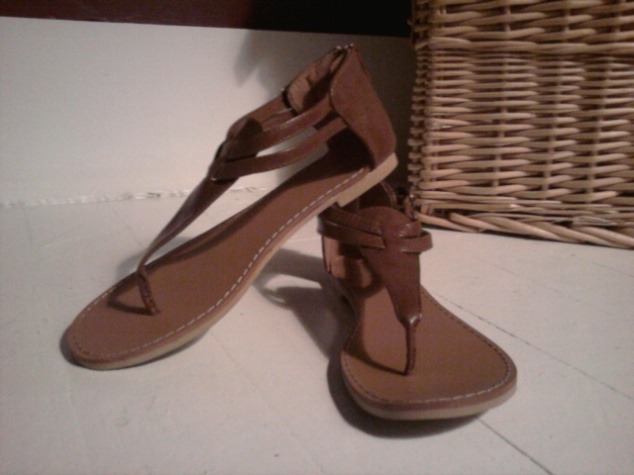