“The road to hell is paved with good intentions.” 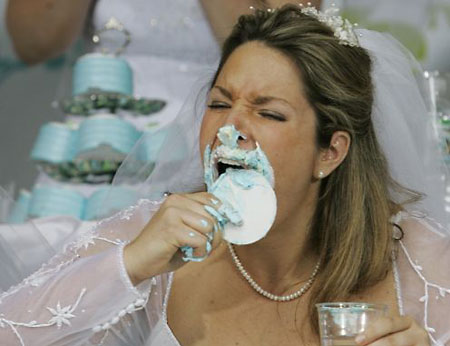 I can’t believe it is May. The first five months of 2013 have certainly crept up on me, along with (much to my horror) a few extra pounds. Stealthily, one by one, the calendar pages for January, February, March, April and May presented themselves as did pizza, beer, wings, nachos and blueberry scones. And this is a problem because I am getting married in two months. Naturally, I’ve wanted to be a beautiful bride… a glowing picture of health in a stylish strapless dress to showcase an upper body that would make Michelle Obama proud (if not jealous).

But alas, I’ve done nothing to accomplish my goal of slimming down. I can still remember stating my intentions to do ALL that I could to look killer for my wedding like it was yesterday… I was sitting at my cousin’s dining table on Christmas night, surrounded by family and slamming cheese cubes, chips and various chocolate-covered bits of deliciousness as I talked (with my mouth full no doubt) about how this was my LAST binge before I started being REALLY careful and intentional about my diet.

Obviously, that plan crashed and burned along with my aspirations to be a size 2 again by summer. A friend took me shopping for wedding dresses mid-January and I refused to try anything on, claiming that it was futile since I would have a completely different body by June. Then February came… and went, as did March and April. With the turning of each calendar page, I would feel the squeeze a little bit more. My time to do something about this is rapidly shrinking. And unfortunately, it is the ONLY thing that has shrunk.

I’ve never lost weight or gotten in shape on a deadline before. I seem to remember reading something that said it wasn’t very effective to try and lose weight for your wedding because the stress of planning along with the attempt to be trim and sexier could potentially backfire. No $#it. My ears are still ringing from the sound of it backfiring on me. Or is that the sound of my button popping off and shattering the window?

I have been stressed. Not because of planning of the wedding actually, but for different reasons altogether. And I’ve learned that I am a stress eater. When I am happy and feeling at ease, I tend to make good choices and slim down. Conversely, when I am stressed and experiencing difficulty or uncertainty, I am lazy and eat bad food.

I wanted so badly to be able to look at the photos from our wedding 20 years from now and think: “WOW! Was I a knockout or what!?!” But then last week it hit me. Twenty years from now I’ll be 58… and no matter what I look like THEN or whether I was a size 2 or a size 8 on the big day… I’ll STILL be wishing I was 38 again. I’m not getting any younger. I’ll never get 38 back. So I ought to enjoy it as I am TODAY. I should probably stop worrying about some idea I conjured of perfection (in a Christmas-chocolaty state of bliss and denial, no less) and buy a dress that flatters the softer, slightly-rounder me and just enjoy the ride. Or in this case… the walk. Down the aisle… toward my future.

Who would have thought something as simple as scratched hardwood floors would trigger a full-scale meltdown? And yet… it did.

I have shared in past entries that I have occasional panic attacks and am somewhat of a high-strung, high-anxiety being. I am a bit of a delicate, contradictory creature in that I often fully embrace life, grabbing onto adventure firmly with both hands… And yet, I am also plagued by excessive worry and bouts with anxiety.

For weeks leading up to my move, Lee had been telling me that I seemed so “calm” for someone who had recently quit her job (without having secured a new one) and was moving all of her worldy possessions into a new home. And you know what? I kind of agreed with his level of perplexedness on this one because “calm” is NOT a word that anyone would really ever use to describe me. But I was calm. I had been calm. Perfectly sane and calm.

Until Sunday night. That night, as I packed a duffel bag with a few items and enough clothes for one night, I began to have a good, old-fashioned anxiety attack. My heart was pounding, I was sick to my stomach and my mind was racing. And the odd thing was that I had no real reason for such an attack. I’d had a relaxing but productive week and was now going back to my old house to get the last remnants of my things, see my parents and return. Simple.

Monday morning as I woke… it was still there. And it has followed me throughout the last 48 hours. My mom, sensing my unessessary anxiety and worry tried to keep me grounded and focused, telling me that I didn’t have to rush back or finish by any strict amount of time so I ought to just slow down, stay one more day to get everything finished and chill out a little bit. It wasn’t as though I had a job to return to… just my fiance, yoga mat and more boxes to unpack. And all of those things would STILL be there the next day.

It wasn’t until the landlord came in and pointed out some deep scratches on the hardwood floor made by my computer chair. See, another thing about me is that it takes VERY LITTLE… to make me feel guilty. MINUTIA. I can be made to feel like shit with so much as a minsinterpreted sideways glance.

And that was the last straw. Operation Meltdown had begun.

I called Lee who was only a little bit put out by the fact that this was ruining our dinner with President Obama. He was also a tad bit concerned about the sick children all over the world who probably wouldn’t make it through the night due to my decision to stay on another day to settle my affairs. And he was slightly disappointed that by my being gone another night he would be forced to watch Sports Center rather than Seinfeld all evening long.

But then—as unexpectedly as the anxiety had arrived—it disappeared with my laughter at the absurdities of his “statements of concern.” All I needed, as it turns out, was a nice dose of REALITY to adjust my warped-and-freaked-out-for-no-good-reason perspective. And with a lot of help from some friends and parents, the house was cleaned and emptied… and I turned over the keys… anxiety-free.